Beowulf is the oldest narrative poem in the English language, embodying historical traditions that go back to actual events and personages in fifth- and sixth-century Scandinavia. During the long preliterate centuries when these traditions were transmitted in the form of oral poetry, they were combined with with a number of legendary and folktale elements (among these are Grendel and his mother, the dragon, and probably the hero Beowulf himself). The written text of the poem, as we have it today, took shape in England during the middle or late Anglo-Saxon period and survives in a single manuscript from around the year 1000.

The work did not become known to the modern world until the earliest editions of the Old English text---and the first Modern English translations---were published in the the early 19th century. Since then it has been recognized as a masterpiece that tells an exciting story in an interesting way. Readers have been fascinated by its consistent high seriousness; the width and depth of its vision of life; its challenging and unfamiliar forms of narrative patterning; its wide range of tones and styles; its vivid presentation (and sometimes critique) of the culture and values of heroic society; and its fundamentally religious theory of life and of the importance of generosity, loyalty and virtuous action in a world of warfare, uncertainty and flux.

Beowulf has been translated into Modern English many times. In general translators try to reproduce one or more of its features or qualities at the expense of others. The present translation, while remaining reasonably faithful to the sense of the original, attempts to imitate its acoustic features--its rhythm, meter and alliteration--more closely than other translations.

The translation is intended for "oral delivery," that is, to be read or recited aloud. Accordingly this work includes an audio stream in which the translator provides a reading of his version of the poem. This reading is meant to model metrical and rhetorical features of the translation, not to lay down the law about how it should be "performed." It can be listened to uninterruptedly from start to finish--which takes about three hours--or it can be accessed at the beginning of any of the forty-three sections into which it is divided (and which correspond to the numbered sections of the surviving manuscript).

The digital text included here has two features that will be useful to readers: (1) verse-numbers of individual verses and an indication of their metrical type can be shown or hidden at the convenience of the viewer and (2) clicking on any proper name (the name of a person or place) will bring up a brief identification of the item in question. 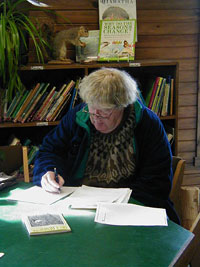 The full text of the translation is available in book form (both hardcover and paperback) from Hackett Publishing Company. This book also contains an elaborate introduction to the poem and its interpretation, as well as translations of two shorter Old English poems that shed light on aspects of Beowulf.

A semi-dramatized (but textually unaltered) version of the translation is available as an audiobook (3 CDs) from the University of Wisconsin Press. The narrative portions are read by the translator and the other speaking parts are taken by professional actors from Wisconsin Public Radio, the American Players Theatre, and the Guthrie Theatre, supported by music and sound effects. Duration approximately 3 hours.

For many years the translator, Dick Ringler, taught courses in the language, literature and history of Anglo-Saxon England and Dark Age Scandinavia at the University of Wisconsin-Madison. He is the editor (with Frederic G. Cassidy) of the third edition of Bright's Old English Grammar and Reader (New York, 1971) and the author of the website Jónas Hallgrímsson, Selected Poetry and Prose, a modified version of which is also available as a book, Bard of Iceland: Jónas Hallgrímsson, Poet and Scientist (The University of Wisconsin Press, 2002). In early 2004 he was awarded the Knight's Cross of the Order of the Falcon by the President of Iceland. Photo of Dick Ringler © Susan Brantly. Used with permission.

Beowulf is the oldest narrative poem in the English language, embodying historical traditions that go back to actual events and personages in fifth- and sixth-century Scandinavia. During the long preliterate centuries when these traditions were transmitted in the form of oral poetry, they were combined with with a number of legendary and folktale…

Beowulf : a New Translation for Oral DeliveryIn the Collection